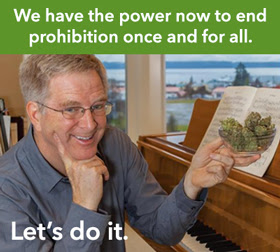 Today, Congress will hold its first hearing on the federal criminalization of marijuana. This is a big day: after patient years of steady gains one state at a time, we’re finally ready for serious marijuana policy reform at the federal level.

NORML has been strong, dogged, and heroic in this civil liberties battle. And now, we’re poised for a breakthrough. To build on our success, it is critical that we help out financially. That’s why, today, I am asking you to stand with me in the fight against the prohibition on pot and empower NORML with a donation.

Last week, on the Fourth of July, as we celebrated our freedom, I kept thinking how it’s high time to end once and for all the racist, counter-productive, and outdated laws that still bring great harm to hundreds of thousands of Americans and deny us a civil liberty we know is ours.

I was just working with NORML and the Cannabis caucus (a growing number of Congresspeople from both parties) on this in DC and we truly are on the verge of a breakthrough. Again, money is power when it comes to this battle and I’m excited to encourage you to help out with this challenge:

DONATE TODAY AND I WILL MATCH EVERY CONTRIBUTION UP TO $40,000!

Being a good citizen means speaking out against unjust policies that hurt Americans. That’s why, last month, I traveled to Washington, DC to urge members of Congress to support an amendment to prohibit the Department of Justice from interfering in marijuana legalization states. While I was on Capitol Hill, thousands of NORML members were writing emails and making calls to their representatives in favor of this common-sense policy change.

We worked hard. We worked together. And we won! For the first time in history, Congress voted to protect state-legal marijuana programs from federal interference.

With today’s hearing, we are presented our biggest opportunity yet to achieve meaningful and lasting reform at the federal level. We will not end our fight until we finally deschedule marijuana federally and until we end this disastrous prohibition once and for all. To that end, I’m pledging to match all donations to NORML up to $40,000. When we all unite in this struggle, there is nothing we cannot accomplish.

Please, chip in and double your impact with my match. Again, for every dollar raised with this campaign, I’ll match it up to $40,000. That means, together, we’ll empower NORML with $80,000 to wage this important fight on our behalf.

There are many reasons to end the prohibition on marijuana. For me, it’s simply civil liberties… freedom. Let’s pave the path forward towards a better and freer America, together. Thanks!

Rick Steves
NORML Board of Directors